Swami Prakashananda was born in California, Trinidad, in January 1964. He attended the Couva Private Grammar School in the late 1970’s.  Upon completion of his secondary education, Swamiji migrated to Canada to pursue tertiary education at York University where he successfully read for a Bachelor’s degree in Political Science and Philosophy at Toronto’s York University.

As a young seeker, he had his first encounter with this realized master Pujya Gurudev, Swami Chinmayananda – the founder of the Chinmaya Mission. This meeting awakened a deep-seated spiritual yearning in Swamiji and he eagerly sought permission from Pujya Gurudev to embark on this most noble journey.

In 1991, Swamiji traveled to India to study Samskrit and Vedanta at Sandeepany Sadhanalaya. Mumbai. Upon completion of his studies in 1994, he was assigned to give discourses at various Mission centers across India and Nepal. Swamiji spent six years in India.

Swamiji also pursued his law degree at Benares Hindu University after which he returned to Trinidad as Brahmachaari Prem Chaitanya. In 1997 Our revered Swamiji initiated Chinmaya Mission activities in our twin island republic. Thereafter began the longstanding tradition of his satsangs, yajnas and camps across Trinidad, the Caribbean, the U.S., Canada, and the United Kingdom.

Through his great dynamism, selfless disposition, humility, charisma, astute leadership style, unique presentation style, and his commitment and dedication to serving the noble Sanatana Dharma tradition, he established and continues to spearhead the Chinmaya Mission Trinidad and Tobago.

The Chinmaya Mission Ashram was the brainchild of our revered Swamiji. A piece of almost barren sugarcane land was transformed into the now highly productive, dynamic Chinmaya Ashram, officially established 2nd of October, 1997. Over the past 16 years, the Ashram has mushroomed into a unique beacon of learning both in the academic and spiritual realms. It continues to add its richness to the diversity of our plural society.

Among the countless positive endeavors of the Ashram, Swamiji has personally conducted hundreds of yajnas, spiritual camps, courses in Sanskrit and Vedic Chanting, and established study groups for children and adults. In addition, there are numerous charitable projects assisting needy communities and families, and several religious symposiums. If this wasn’t enough, the Ashram also runs schools under the name Chinmaya Vidyalaya , with centers in Mc Bean, Debe, Gasparillo, Barrackpore, Penal Cunupia and Felicity, all of which continue to add value to, and positively impact the lives of thousands of our children and citizens, contributing to their spiritual, personal and intellectual development.

In recognition for the selfless community service rendered by our Pujya Swami Prakashananda, the government of Trinidad and Tobago awarded him with the Chaconia Gold Medal in 2012.

Swamiji has conducted three residential Vedanta & Sanskrit programme at the ashram and completed the third in 2018. This translates into him making a tremendous sacrifice to impart the ancient wisdom of the Rishis to the Brahmacharis and Brahmacharinis who have availed themselves to this life transforming experience.

Brahmacharini Kritika Chaitanya was born in Toronto, Canada. After studying International Development Studies and Philosophy at the University of Toronto and engaging in much social work and volunteerism, she joined the 2nd Residential Vedanta Course at Chinmaya Mission Trinidad and Tobago Ashram in 2013. After a year and a half of studying the highest knowledge and Sanskrit under the guidance of His Holiness Swami Prakashanandaji, she has committed herself to serving Chinmaya Mission. She is currently posted in Trinidad, conducting public satsangs and classes for adults, seniors and young females, and assisting with Ashram activities and enterprises.

Brahmachari Dvijot Chaitanya was born in Mahaica River, Guyana, where he spent many years studying secular and religious education at Ashrams and Temples. After obtaining a B.A in Social Work, he traveled to Trinidad to join the 2nd Residential Vedanta Course at Chinmaya Mission Trinidad and Tobago in 2013, under the tutelage of H.H. Swami Prakashananda. Following the two year intensive course studying the Vedas, Upanishads, Bhagavad Gita and Sanskrit, he chose to continue on the path of jnana (knowledge) and was initiated in August of 2014. Dvijotji has been traveling between Trinidad and Guyana, conducting classes in Hinduism, meditation, Bhagavad Gita chanting, holding public satsangs and managing various Ashram activities. 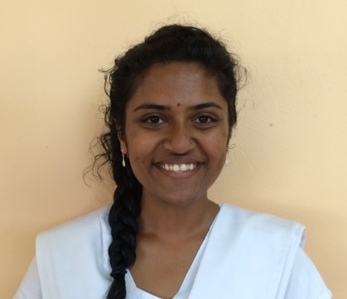 Brahmacharini Akalka was born in Chennai, India, and grew up in the United States.  After completing her Degree in Cognitive Science from UC San Diego, and her Masters in Cognitive Psychology from UC Santa Cruz, she came to Trinidad in 2013 to attend the 2nd Residential Vedanta Course under His Holiness, Swami Prakashananda. After rigorous spiritual training, she has committed herself to serving Chinmaya Mission and our Spiritual Heritage. She is currently posted in Chinmaya Mission Trinidad & Tobago, conducting Satsangs, study classes in Bhagavad Gita and Ramayaan, Spiritual Education and Sanskrit classes in Chinmaya Vidyalaya schools.

Brahmachari Hamerajh was born in Trinidad and Tobago. He completed his Spiritual training in Sandeepany Sadhanalaya, Mumbai under Chinmaya Mission. He now is the Senior Brahmachari of Chinmaya Mission Trinidad & Tobago, under the guidance of Pujya Swami Prakashananda. His profound humility, deep wisdom and sincere love for the Scriptures and the Saints are visible in his work throughout the country. Brahmachari Hamerajhji conducts Satsangs, Spiritual classes, and assists in a wide range of Mission activities.